A beautiful wide antique bangle from the Victorian era, c1890! Made of sterling silver the bangle features charming hand engraving and appliqué detail to the front half of the bangle. The organic scene includes a simple plant stem, branch, leaves and flower appliqués which meander among hand engraved swirls and feathery designs to each end. The scene is bordered with an appliqué line along the top and bottom, as well as a fine zig-zag pattern. Just gorgeous! The stunning design reflects the Aesthetics movement which was popularized in the late 19th century and included Japonesque design motifs. The back half of the bangle is plain. The oval hinged bangle has an integrated side tongue connection which closes with a firm click, there is also a safety chain connected for extra security whilst wearing. Subtle gilt remnants can be seen to the bangle which indicates the bangle originally had a gilt finish... the gilt remnants giving further depth of character to the wonderful design! The total width of the bangle measures 3.10cm (1 & 1/4").

Adding a little intrigue to the bangle is a hand engraved Australian Rising Sun motif placed to the inner back half - likely a 20th century addition to the bangle which carried a symbolic Anzac meaning to the wearer!? Also there is a stamp to the tongue which is barely decipherable, appearing somewhat to be a cross motif. Otherwise unmarked, tests indicate sterling silver.

A near identical Victorian bangle can be seen in the Vivienne Becker book titled 'Antique and Twentieth Century Jewellery' pg 54.

A truly wonderful antique bangle of the Aesthetic movement, gorgeous on and would make a striking addition to any collection! 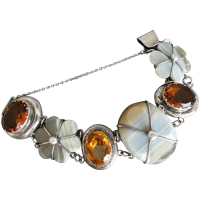 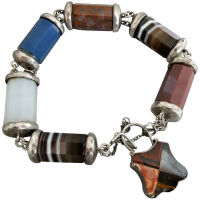 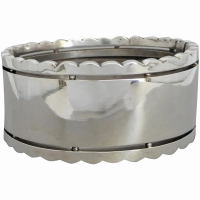