Gold kewpies, such as this one, are becoming increasingly scarce, and this little fella is such a rare find! The hollow & small staure Kewpie pendant dates back to the late Edwardian era, circa 1910's. It is made of 9ct gold, a yellow gilding over rose gold base, (typical of that era). Over time the yellow gilding has softly faded to reveal a warm rose glow on the Kewpie's rounded tummy and forehead, adding further depth of character. This Kewpie features all the classic quirky attributes - side glancing eyes and the quaint little smile (don't you wonder what is he thinking?!) along with tiny ear, hand and feet profiles. There is even a little pocket of hair on top - oh so cute! The Kewpie is standing on a shaped podium, appearing as if he has a sense of importance! The reverse side is flat, stamped "9CT" (denoting 9ct gold) alongside what appears to be the letter "R". A 9ct gold jump ring is attached to the top allowing for a chain of your choice to thread through.

A quirky and most adorable little character, steeped with oodles of endearing history! Perfect for anyone with a Kewpie fetish! 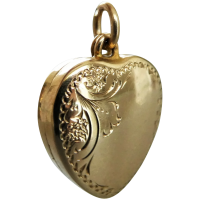 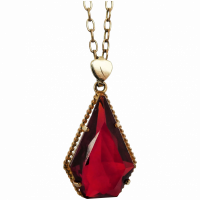 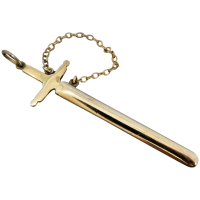