A fabulous piece from Scottish agate jewellery, dating back to circa 1870! The sterling silver bracelet is comprised of various agate and jasper links, each fashioned in an appealing lozenge shape with faceted shaped sides. The Scottish agate or often referred to as carnelian and banded agate, along with jasper amalgamate beautifully together in an array of earthy rustic tones of burnt orange, brown/beige and white. The natural agate and jasper are set with a 'hammered' cap each end, silver jump rings connect in-between and two 9.60mm banded agate beads. The silver is unmarked, however tests indicate sterling silver- many of the these Victorian Scottish bracelets were not hallmarked.

The bracelet boasts a charming shield padlock featuring ornate foliate scroll engraving and a banded agate on the reverse. The padlock clasp secures the hook-and-eye style closure. A bolt ring is attached to opposite bracelet end, the bolt ring appears to have been a later addition. A safety chain may be added if you wish.

Scottish jewellery was made popular by Queen Victoria as it became a souvenir of her visits to Scotland. From the mid 19th century Queen Victoria frequented Scotland and her Scottish Castle Balmoral.

A wonderful piece of Scottish history, with beautiful all round workmanship! Bracelet would make a special addition to any collection! 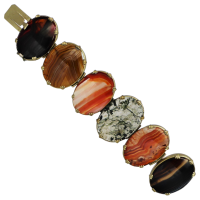 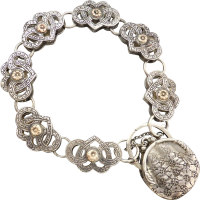