Gold kewpies, such as this one, are becoming increasingly scarce. The good-sized hollow Kewpie pendant dates back to the late Edwardian era, circa 1910's. It is made of 9ct yellow rose gold - a charming rose glow with a yellow tinge. This Kewpie features little angel wings, along with all the typical quirky attributes- large glancing eyes, a quaint little smile (don't you wonder what is he thinking?!), raised eyebrows, along with tiny ear, hand and feet profiles. As well, his little backside is beautifully detailed with plump bum cheeks, and he has a little pocket of hair on top. So adorable!

There are stamps on the reverse side - "9CT" along with likely the makers mark - "C&SL". A loop is soldered to the back half of head. This kewpie pendant is not the typical small charm size, measuring 3.70cm (1 1/2" inch) tall, not including ring.

A quirky and most adorable little character, steeped with oodles of endearing history! A rare little charm for the Kewpie lover or collector! 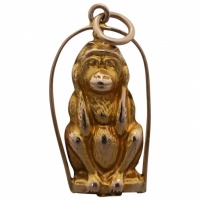 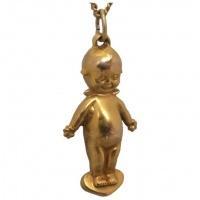 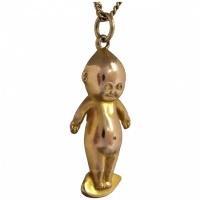