These little gold kewpies are becoming increasingly scarce, and this little fella is such a rare find! The hollow Kewpie charm dates back to the late Edwardian era, circa 1910's. It is made of 9ct gold, a yellow gilding over rose gold base, (typical of that era). Over time the yellow gilding has softly faded to reveal a warm rose glow on the Kewpie's rounded tummy, forehead and buttocks, adding further depth of character. This Kewpie features little angel wings, along with all the classic quirky attributes - side glancing eyes and the quaint little smile (don't you wonder what is he thinking?!), along with tiny ear, hand and feet profiles. As well, his little backside is beautifully detailed with plump bum cheeks, and he has a little pocket of hair on top. So adorable! The Kewpie is standing on a shaped podium, appearing as if he has a sense of importance! A 9ct gold jump ring is attached to the top. Chain is not included.

There are stamps on the reverse; "9" denoting 9ct gold, also a "W" and "Unicorn" which are the marks of the Australian manufacturing firm Willis & Co. Willis & Co was one of Australia's leading manufacturers of gold jewellery in the 20th century, before being taken over in the 1930's by G & E Rodd.

A quirky and most adorable little character, steeped with oodles of endearing history! And a rare little charm for the Kewpie lover or collector. 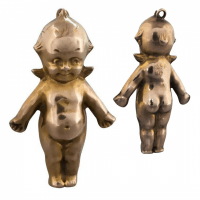