A gorgeous antique cross necklace from the early Edwardian era c1901! The cross is made of 9ct gold and has a charming buttery yellow appearance combined with rose gold highlights. The cross would have originally been fire gilded over rose gold giving the cross a subtle matte texture with a buttery yellow colour and over time exposing the warm rose gold underneath. The beautiful cross features an ivy leaf vine applique which meanders down the cross. Ivy leaves often represented friendship and fidelity in the 19th and early 20th century. Adding further charm is the little white seed pearl accents resting in each leaf. The pearls are more than likely natural due to the age. A sturdy rose gold jump makes up the rest of the cross.

The cross is accompanied with the 9ct gold trace necklace. The necklace is from around the same era (early 20th century) and compliments beautifully with the cross in colour, style and heft. An original barrel hook clasp attaches the chain securely together.

The cross bears a set of English hallmarks on the reverse - an anchor denoting Birmingham, '9' '.375' denoting 9ct gold and a letter stamp which is very difficult to decipher, but possibly the letter 'g' denoting year 1906. As well the jump ring is stamped '9' '.375'. Also makers marks "S & P" which is that of Smith and Pepper - a once prominent jewellery manufacturing firm in Birmingham, England which traded between 1899 to 1981. The Smith and Pepper factory is now the Museum of the Jewellery Quarter.

A charming antique cross steeped with sentiment and history. A stunning cross for day or night wear. The perfect gift for the avid cross admirer or treat yourself! 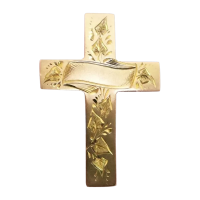 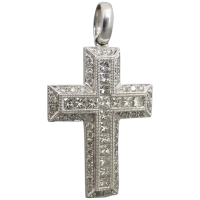 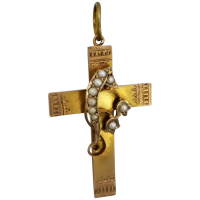