An impressive antique boxed cameo suite from the Victorian era, c1870! The suite is made of rolled gold and features composite cameos; white glass subject on a black base. The eye-catching milk glass cameos depict a portrait of a noble lady in profile atop of a black base, giving a refined and elegant look. The cameo brooch base is possibly celluloid and when viewed in daylight a translucent purple hue is seen. A polished gold frame embellished with a twisted wire surrounds the earring cameos, and a bead rests above the cameo. The cameos dangle freely from shepherd hook fittings. The brooch has a very similar simple bezel frame and is equipped with a loop to the back allowing versatility to be worn as a pendant too (although likely once utilized for a safety chain). There is also a typical Victorian-style 'C' pin connection to the back. The suite is housed in what appears to be the original antique box lined with plush purple velvet and ivory silk. Charming.

Cameo jewels were a very desired adornment in the 19th century (and indeed centuries before!). Though when Queen Victoria succumbed to the beauty of cameos and routinely wore them, a trend was evolving ... and what Queen Victoria did, everyone did. So it was only the inevitable a less time-consuming cameo method was to ensue; A common mid-late 19th century method of replicating shell and hardstone cameos was by the technique of assembled 'composite' cameos, where the cameo subject was affixed to a dark, typically glass base. 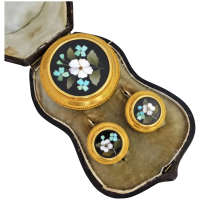 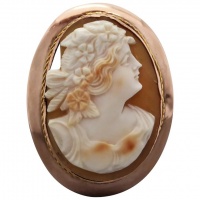 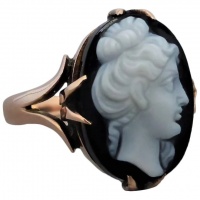