A scrumptious pearl and diamond ring from the Georgian era, late 18th century! Likely to have started life out as a Georgian button, the piece is a clever 19th century ring conversion, and a memorial piece suggestive of the endearing inscription on the reverse which appears to read "J Gundry died 6 dec 1782. aged 73.". Shimmering from the centre of the ring rests a juicy rose-cut diamond. The rose cut diamond radiates with an extra glow due to the foil-back setting with the estimated weight of the diamond being between 0.35cts to 0.40cts. Surrounding the diamond are eight lustrous natural half pearls which display a stunning surface radiance and satiny skin. The wonderful cluster style is typical Georgian-fashion, sitting low to the finger, with the stones resting in low crimped collet settings, and a smooth closed-back which fits like a glove on the finger. A stunning hand engraved shank which splits at the shoulder makes up the rest of the ring - gorgeous crisp engraving of florets near the shoulders and scroll foliage engraving around the entire shank.

No hallmarks are sighted to the ring which are typical of the era, however an XRF test indicates 16ct gold top and 15ct gold shank. The gold colour is a lovely warm, deep yellow hue.

A mesmerizing Georgian ring, utterly gorgeous on, and would make a notable addition to any ring collection! 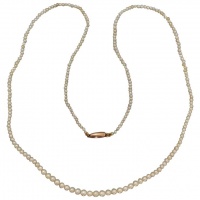 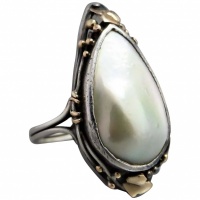 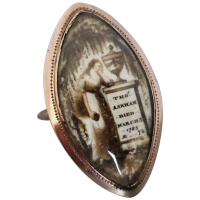 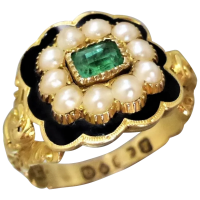 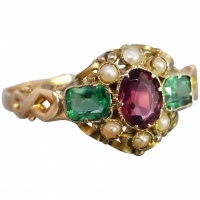 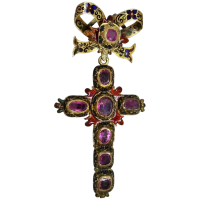