An exceptional antique demantoid garnet and diamond bangle from the late Victorian era, c1900! The Australian hallmarked bangle is made of 15ct gold and features a subdued buttery yellow gold finish. Dazzling along a rectangular platform are three electric lime green demantoid garnet stones and eight dazzling old-cut fine white diamonds. The garnets rest flush in beaded and grooved style settings, inline, and interspaced with four diamonds either side.Viewed under the microscope to the garnets are horsetail inclusions, which are indicative of rare Russian demantoid garnets found from the mid-19th century in Russia's Ural mountains. Therefore the demantoid garnets are likely to have been imported gemstones in the late 19th century, and utilized in this unique early Australian bangle.The hinged bangle features beautiful and ornate granulation and coiling detail, reminiscent from the 19th century Etruscan revival. The back half of the bangle is plain. An integrated tongue clasp secures the bangle nicely with a firm click, there is a safety chain for extra security.

The bangle bears early Australian hallmarks inside the lower half of the bangle. Seen is the typical early Australian set of three marks used between c1890 - c1920 ; the 'hanging sheep' motif, denoting 15k gold, "15" is also stamped centrally, a 'koala' motif mark, and 'K5' (possibly the registered mark). The intriguing koala stamp cannot be ascribed to a particular maker, albeit is in association with the early guarantee marks of the Manufacturing Jewellers Association (MJA) of Victoria.

A one-of-a-kind antique bangle. A lovely piece of jewellery which would look nice stacked with others, or just as nice by itself! 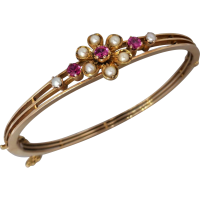 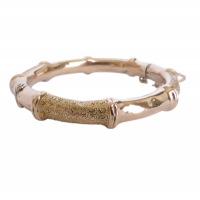 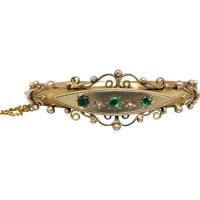 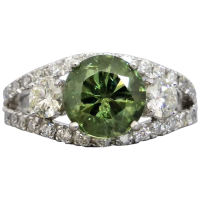