Bangle is crafted in a gleaming 14k gold. The gold colour is the lovely warm yellow rose hue, a colour often seen in European antique pieces. The bangle is marked on the main setting edge and tongue with the Russian kokoshnik head profile facing left, and number '56' is stamped on hinge side (indicating 14K gold). The makers mark, 'AP' in cyrillic, is also stamped on the tongue as well as inside bangle.

Bangle measures 16cm (6 1/4") inner circumference and 5.70cm (2 1/4) inner diameter. An integrated tongue clasp secures the bangle firmly. Bangle does come with some flaws consistent with age- minor signs of led solder near arm of setting, and small hairline cracks to reverse top half- not seen whilst wearing. Also slight dings are evident, albeit does not take away from the overall look of this Russian beauty! Priced accordingly.

A unique are somewhat rare bangle, perfect for the lady with distinct taste, or for the avid Russian demantoid garnet jewelry collector! 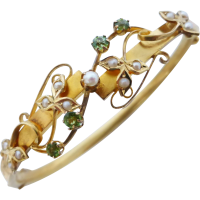 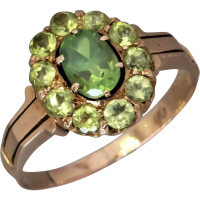