A beautiful Russian demantoid garnet ring dating back to the late Edwardian period, circa 1910's. A timeless cluster design with a regal coronet style undercarriage and pierced shoulder work. The garnets are held into place by claw and bead type settings with the central garnet slightly raised in height.

The ring features eleven bright demantoid garnets of varying pale 'apple green' shades. The largest garnet has a slight deeper green shade, it also has the trademark golden brown 'horsetail' internal inclusion seen under magnification. The 'horsetail' inclusion is a distinguishing feature of the Russian demantoid garnet. Demantoid garnets were first discovered in Russia's Ural Mountains around the mid 19th century, and were mined up until 1917. The gemstone was named demantoid for its notable diamond-like luster and high refractive index. Consistent with the age, the demantoid garnets are showing slight wear. The centre table (top facet) of stone has had a recent polish, albeit the surrounding facet edges of stone have abrasions and there is a small nick to one end, seen under magnification. Surrounding smaller stones are not as abraded with just a few small nicks to some.

Ring is crafted in a gleaming 14k gold. The gold colour is the lovely warm yellow rose hue, a colour often seen in European antique pieces. The ring is marked on the shanks outside, near base with the 56 zolotnik old Russian gold standard (14K). There is also hand engraving on the inside of shank with the date "19 8 over 111 15" "0/0"

A gorgeous and somewhat rare ring, perfect for the lady with distinct taste, or for the avid Russian demantoid garnet jewelry collector! 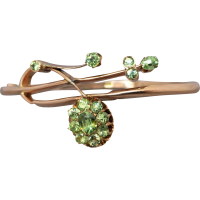