Bold, arty and beautiful are words that describe this Victorian moss agate brooch. The good sized moss agate features mottled and streaky filaments of a rustic red combined with spinach green shades which are slightly transparent along edges. The moss agate is mounted into a 9ct rose gold robust bezel setting with pin and 'C' clasp. There is a loop for safety chain if you would like to add. Likely Scottish origin.

Moss agate is a semi-precious gemstone formed from silicon dioxide. It is a form of chalcedony (cryptocrystalline quartz) which includes minerals of a green colour embedded in the stone and suggestive of moss. However despite it's name moss agate does not contain organic matter and is usually formed from weathered rocks. 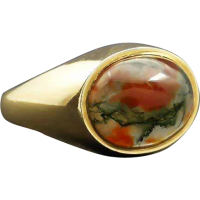 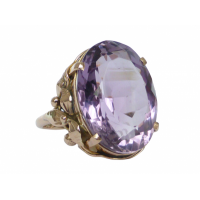 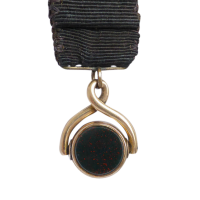