A stunning hardstone cameo pendant from the Edwardian era - early 20th century! Hand made of 15ct gold, the lovely piece features a beautifully hand-carved natural sardonyx stone cameo. The carved cameo in raised relief depicts a woman's bust with highly detailed locks of hair and a hairpiece. The woman is carved into the white band of the agate, resting above a brownish orange layer of stone below. The cameo rests in a milgrain accented collet and is surrounded by an unusual inner scalloped detail frame, embellished with six lustrous natural seed pearls at each point. Finishing the piece to the top is a complementary pearl-accented stylized bail with disguised back loop, allowing a chain of your choice to thread through. Milgrain details accent the entire frame edging as well as the bail... just gorgeous! Stamped to the back "15CT" denoting 15ct gold, alongside another stamp which is likely the makers mark, albeit unable to identify.

Hardstone cameos, such as this sardonyx, are more difficult to carve than the shell cameos which are softer. Hardstone cameos were cut with specialty tools which took months to complete and required a high level of craftsmanship.

An elegant antique cameo pendant which would easily suit today's style. A classy antiquity touch to the neckline! 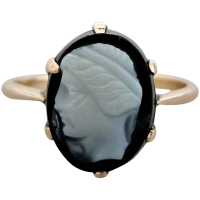