A striking estate Australian opal dress ring from the early 21st century! Crafted in 9ct yellow gold, the lovely estate ring features a polished cabochon pear-shaped natural and solid opal gemstone with an estimated weight of 6.50 carats. The opal derives from Allan's Rise mining field which is near the renowned, and largest gem-quality opal producer in the world; Coober Pedy, South Australia. The opal displays a greyish blue body hue with a subtle play of colour - iridescent flecks of reddish-orange, green, yellow, blue and purple dance across the surface.... which comes more alive in the sunlight! Adding an artistic element to the opal is the blackish potch lines which run down the middle and to the side of the opal. The lines due to the vertical formation of the opal, and typically a characteristic of Allan's Rise opals. The opal rests in an eight claw collet setting - the claws upswept from the swirled shoulder wires forming an asymmetric design. A sturdy 3mm wide shank makes up the rest of the ring. Stamped "375" inside the shank denoting 9ct gold.

The finger size of the ring measures 'Q'.

Allan's Rise opal field in South Australia are known for producing a popular strain of dark based opal, as well as prized black opal. The opal is reported to be the hardest and most stable opal of all Australian opal fields. The majority of opal produced at Allan's Rise was formed in the vertical seams creating interesting lines running through the opal. The field started producing precious opal around year 2005.

A distinct statement opal ring, perfect for any opal lover! 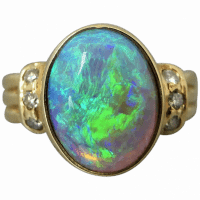 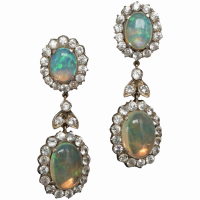